Lost Portrait of Sitting Bull, Painted From Life, to Be Auctioned March 18 in Florida

Consigned by a descendant of the original owner, the portrait is one of four paintings of the Lakota leader created by NY artist Caroline Weldon and is believed to be the only one still in private hands

CLEARWATER, Fla., Jan. 12, 2023 /PRNewswire/ — On March 18, 2023, Blackwell Auctions will offer a painting of one of the most historically important figures of the 19th century, Lakota chief Sitting Bull (1831-1890). American history will forever denote Sitting Bull as the dynamic military, spiritual and political leader who united the Sioux people to defeat US General George Armstrong Custer at Little Big Horn in 1876. 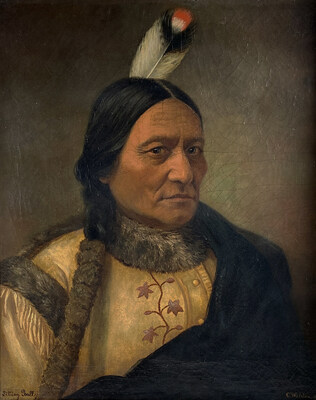 The portrait is one of four known to have been painted of Sitting Bull by Caroline Weldon (1844-1921), a New York artist who traveled to North Dakota in 1889 and became the chief’s confidante and personal secretary until 1890, when they had a falling out over his support of the Ghost Dance movement. A fictionalized account of their relationship and her interest in painting him is the subject of a 2017 movie, Woman Walks Ahead, with Jessica Chastain as Weldon.

Of Weldon’s four portraits, one is held at the North Dakota Historical Society in Bismarck, while another is in the collection of the Historic Arkansas Museum in Little Rock. Two of the four were presumed lost, but this painting – an oil-on-canvas – was consigned to Blackwell Auctions of Clearwater, Florida, by the descendant of its original owner, a railroad construction engineer from Minnesota.

“The cultural significance of this piece can hardly be overstated,” said Edwin Bailey of Blackwell Auctions. “The painting represents at once the poignant intersection of two marginalized groups – the indigenous peoples of America and women artists.”

The March auction, titled The American Sale, will also feature a large collection of important historical American documents with a timeline from 1650 to the mid-20th century. The selection includes pieces signed by Abraham Lincoln, William Henry Harrison, Mark Twain, Robert E. Lee, Charles Lindbergh, and more than 50 significant military and political figures. Additionally, there are handwritten pieces from the Revolutionary War, the War of 1812 and the Civil War. Other items include a clock and several books, some signed, which were owned by Annie Oakley and obtained with provenance from one of her descendants. The sale features dozens of 19th-century firearms by Colt, Remington, Smith & Wesson and other legendary gunmakers. A selection of tintypes, daguerreotypes, CDVs and cabinet cards of historical figures, including Native Americans and Civil War soldiers, will also be presented.

“Serious collectors of American history will be delighted when the auction goes online in late February,” Bailey said. “The vast majority of the items in this sale haven’t changed hands in generations.”

For additional information, visit www.blackwellauctions.com or contact Edwin Bailey at 727-546-0200. Bidding is available online through LiveAuctioneers, Invaluable, Bidsquare, HiBid and through the Blackwell Auctions app (IOS and Android), as well as absentee and by phone.